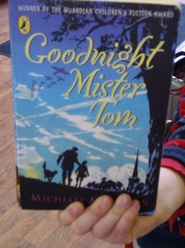 Some members of 5th class studied Goodnight, Mr. Tom. They really enjoyed reading this book. Read on and find out more.


William is evacuated from London during World War 2 to a village called Little Weirwold. He stays at Mr. Tom’s. His life changes for the better when he leaves London.

What was William afraid of?

Do you think William had a sad life?

How do we know that William was scared?

I thought the book was very good because it is very interesting I liked the bit when Willie met Zach.